Korean Dramas teach us about the power of a kiss 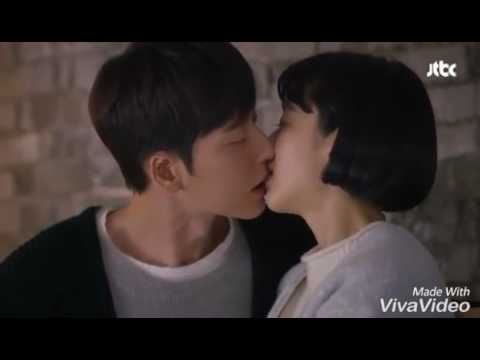 The kiss that inspired me to love “love” again was in a scene of a 2017 Korean drama called “Man to Man”.

Man to Man is an action-comedy with a fair bit of romantic tension sprinkled throughout. It is in the top half of my top 10 favourite Kdramas, and the kiss that inspired this post is but one of these reasons for that ranking.

There is something stilted and almost comically non-sexual about a lot of kisses in the Kdrama world. For those who haven’t watch many or any Korean dramas, let me discuss this briefly.

The first kiss in a melodrama is critical. You have probably been rooting for these characters to profess their love for one another for about 10 episodes out of their usual 16 – 24 episode run. There is huge build-up to this moment, and the payoff is typically worth the wait. However, that pay off usually comes in the form of a kiss. Unfortunately, this is where I find there is an issue.

Now, before I go on, I will preface this by saying that I am viewing this through the lens of someone who lives and grew up in North America (N.A.) and has viewed relationships, love, and sex through that lens. I recognize that our societal mores and values are different when it comes to these issues. I will, however, state that I feel that this lens has allowed me to appreciate the time and care the writers of these melodramas put into crafting these relationships. Relationships that, in comparison to some things I see here, would be deemed saccharine. It is that very innocence and sentimentality that speaks directly to a part of my heart that a lot of North American television can just no longer access.

Having said that, the big moment arrives, the viewer’s heart is so full. Tears are welling in your eyes, and the scene that plays out on-screen is something very much akin to what you probably remember your first awkward kiss to be like. You remember the one – that cringy moment that happened when you were perhaps too young to even conceptualize what a kiss may actually mean (again, heavy emphasis on the N.A. perspective of a first kiss).

These high-intensity moments often play out like this: The instigator usually takes their loved one by surprise and presses their face against the other’s face. The positioning of one pair of lips is generally aligned directed to the lips of the other – meaning upper and lower lips line up and land directly atop one another. Not generally how a romantic smooch is applied. It is more akin to how one might kiss their grandmother on the lips.

The scene continues, and it is revealed that the recipient of the kiss is often shocked and does not react. They are simply there, eyes opened wide, posture ramrod straight, showing zero emotion. The musical score sweeping around them does the heavy lifting and tells you that this moment is magical, and you believe them – because music is powerful, and honestly, they have been priming you with snippets of the love theme for the entire series up to that point.

Now, the first couple of kissing scenes in this show were precisely that, eye-rollingly, soap-operatically juvenile, but that is exactly why the kiss that occurs, later on in the show, is so powerful. The writers of this show capture perfectly what I, as a writer, attempt to achieve.

I haven’t seen a kiss that true in a Kdrama in a very long time. It had been playing over and over in my mind, and I felt compelled to rewatch it last night. I couldn’t remember what episode it happened in, so I did the next best thing, I typed “Kiss between Cha Do-Ha and Kim Seol-Woo” into a Google search, and I was not disappointed in the result. Apparently, I am not alone in my appreciation of that particular on-screen smooch.

One of the videos – the one above – was made by a fan that slowed the whole scene down to play it along with the love theme, which in itself is super sugary sweet, but I have to admit, the romantic in me kinda liked it.

There hasn’t been a kiss that I have found this believable since Coffee Prince, a Kdrama that aired in 2007. The conflict was believable, the attraction, while complicated, was unmistakable, and the pay off was huge. That show, and a few others, namely Gu Family Book (Kang Chi, the Beginning) and Fated to Love You, firmly solidified my appreciation of Korean melodramas. As a result, I have added them consistently to my T.V. must watch list for years (thank you, Viki, and Netflix), but I digress. Back to the kiss at hand.

The writer in me loved it. I found myself longing for the intimacy portrayed. It was manifestly evident in a way that I found lacking in a number of other shows, and something that I find N.A. television does not invest much time in overall.

I appreciate the time the writers took to get the sentiment down on paper, but I would be remiss if I did not acknowledge and commend the work of the very talented actors, Kim Min-Jung and Park Hae-Jin. Words on a page are a powerful thing, and to be able to give them life in the form of an on-screen performance that moves people takes skill.

They were able to, so seamlessly, step in and capture the very essence of the emotion. It is a challenge to bring not only someone’s words to the screen but also the emotional weight behind those words, and they did a wonderful job.

What moved me most about this particular kiss was the sequence. It is very simple, but it is also very significant.

The sequence is this: the lean in, the initial connection, the pause, and the check-in, followed by the fulsome kiss.

The pause followed by the check-in is such a small moment, it takes less than a second, but that consent check is pregnant with meaning. The emotion it conveys is undeniable. It’s love.

I have thought a lot about the moments in a kiss, and that moment right before your lips touch, in my mind, is one that is so full of significance and meaning in a relationship. I wrote about this phenomenon in a poem called The Space Between.

I am currently working on a WIP that I feel requires a substantial investment in ensuring the emotional realism between two of my characters. The pressure I am putting on myself to get the connection right is palpable – to me anyway.

As I write, I am taking my time. I pause – a lot – when I write their scenes. I try to place myself in each of their heads, and I work my way through the scene. What is this person thinking/feeling? How would this action/touch/word impact them or the other person? It takes time, but I think it is well worth the investment if the reader finds themself truly transported to that moment.

I have found that Korean melodramas have helped me out a great deal with this aspect of my writing. The writers spend a lot of time pacing these moments, and while I may think that some of the scenes can be super cheesy and over the top and lack sexual chemistry, the formula is clear and applicable, with some tweaks, to your personal writing style.

If you are struggling with the romance in your story or are just looking for some new love stories, give a Kdrama a try. If nothing else, it might give you a new or expanded appreciation of romance by seeing it through a different lens.

So, all of that to say, 1) Kissing is good, 2) Korean dramas are great, and 3) when you get it right, a kiss, either on-screen or in print, can stay with your audience for years to come.

3 thoughts on “The Kiss that Reignited my Love of Love”

Thanks for Stopping By!

I hope to have new content up once a week.  Check back often!

Listen to Written By Grimes: The Podcast

Written By Grimes: The Podcast